So yesterday Netflix finally had something worth watching on, I ended up watching two films, one called, Vegucated and the other called Forks Over Knives.

These two documentaries focus on the meat business and how bad it is for our health. We as a people have been conditioned to believe meat is good for us and that we need it for protein when that is  not the case.

I had already tried becoming a vegetarian before when I was younger but didn’t know how to do it properly so I developed vitamin deficiencies and had to start eating meat again, but these two films reignited the want to become vegetarian again. So I am. Being lactose intolerant and following Ayurvedic cooking teachings it already feels like I’m vegetarian anyway, the only things left to cut out are chicken and fish.

(Even though highkey Im gonna miss my crab and shrimp 😥 )

So I did. Day 2 of pure vegetarianism/veganism begins today 🙂

I highly suggest to any and all reading this to go watch these two documentaries on Netflix and it will at least open your eyes to some of the deplorable conditions that our “food” lives in.

“Vegucated is a feature-length documentary that follows three meat- and cheese-loving New Yorkers who agree to adopt a vegan diet for six weeks. There’s Brian, the bacon-loving bachelor who eats out all the time, Ellen, the single mom who prefers comedy to cooking, and Tesla, the college student who avoids vegetables and bans beans. They have no idea that so much more than steak is at stake and that the fate of the world may fall on their plates. Lured with true tales of weight lost and health regained, they begin to uncover hidden sides of animal agriculture and soon start to wonder whether solutions offered in films like Food, Inc. go far enough. Before long, they find themselves risking everything to expose an industry they supported just weeks before. “ 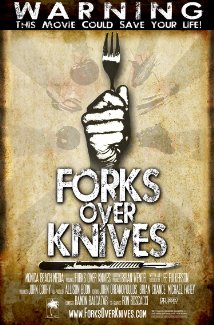 Forks over Knives: Examines the profound claim that most, if not all, of the degenerative diseases that afflict us can be controlled, or even reversed, by rejecting our present menu of animal-based and processed foods.